[Stephen Cooke | Posted: April 9, 2022] While a portable speaker played the sound of Joni Mitchell singing “They paved paradise and put up a parking lot,” Haligonians dismayed by the recent destruction of historic homes on Robie Street gathered in front of the rubble-strewn site across from Camp Hill Cemetery.

Organized by the citizens’ group Development Options Halifax, the rally at the corner of Robie and Bliss streets was held to make residents aware of impending changes to the neighbourhood, and to request they take action against ongoing developments that are changing the character of the city at the expense of affordable housing, the environment and reducing congestion on its streets.

END_OF_DOCUMENT_TOKEN_TO_BE_REPLACED

HRM hosted two public hearings on September 7, 6pm (day after Labour Day) via zoom and approved Case 20761 and Case 22927. The huge public opposition to these proposals was seriously misrepresented by HRM staff and ignored by everyone but Patty Cuttel the only HRM Councillor to vote against the Rouvalis proposal. This is a bad process. It continues to result in a bad outcome. 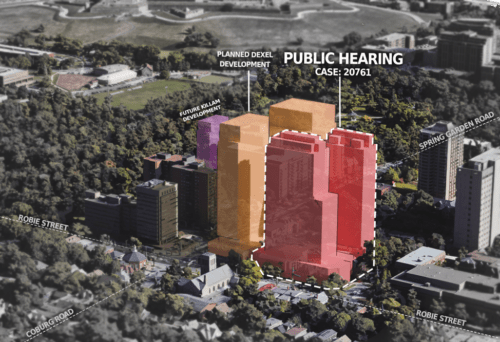 Developer Rouvalis can now build TWO TOWERS, 28 and 29 storey + penthouses, at Robie and College. Confusingly, Case 20218 (orange) developer Dexel also wants TWO ~30-storey towers in the same block at Robie and Spring Garden, but these 2 developments are being considered separately. Dexel’s towers will be considered at a future public hearing for the 2 towers. If permitted together the FOUR ~30-storey towers will demolish 12-14 buildings, 110-114 affordable units; an area equivalent to a 12-storey building. There will be stalls for ~861 cars. Constructing new towers will emit 31,000 tonnes+ of greenhouse gas. Development Options Halifax modeled a 9-storey in-fill option with~ 550 units and keeping all but one building.

Noushin Ziafati – July 6, 2021
An advocacy group says it’s concerned that a set of proposed highrise developments in central Halifax will negatively impact the historic Carlton Street neighbourhood and that Halifax Regional Municipality hasn’t been transparent in the approval processes for the buildings, which a local councillor adamantly denies. END_OF_DOCUMENT_TOKEN_TO_BE_REPLACED

KJIPUKTUK (Halifax) HRM’s response to significant public concerns over two massive Spring Garden Road high-rises that will overwhelm and negatively impact the entire historic Carlton Street neighbourhood has been to give the developers even more height.

On June 23, the HRM Heritage Advisory Committee moved the Rouvails proposal-Case 20761, at Robie Street, College Street and Carlton Street a step closer to approval, with the new heights now increased to 28 and 29 storeys plus penthouses from the original proposal of 20 and 26 storeys. This development will be adjacent to Dexel’s proposal- Case 20218, for two towers originally proposed as 16 and 30 storeys but now also approved for up to 90m or 29 storeys plus penthouses. END_OF_DOCUMENT_TOKEN_TO_BE_REPLACED

August, 2020-Letter to HRM Auditor General
Re- Review of HRM Planning’s public consultative process as a Charter matter
This letter (accompanied by 10 brief case studies) is to request that HRM Auditor General conduct a review of HRM Planning Department’s public engagement process and outcomes with respect to HRM planning and council votes. In writing to you we wish to note that we are aware of your July 2018 report to HRM Council on the operation of the Planning Department with respect to development agreements. We are prompted to write regarding a crucial aspect of the operations of that Department not addressed in the report, namely public participation.
The HRM Charter, Part VIII, s.208 states: “The purpose of this Part is to …(c) establish a consultative process to ensure the right of the public…to participate in the formulation of planning strategies…”
END_OF_DOCUMENT_TOKEN_TO_BE_REPLACED

Hadrian Laing presents his model of proposed Carlton Street developments to a group of interested citizens.

Development Options Halifax wants the city to require 3-D models for all developments and for changes proposed with the Centre Plan.
Learn why in this interview from News 95.7FM where host Todd Veinotte speaks with the architect and 3-D modeller Hadrian Laing:
Then read & sign the petition – https://forms.gle/3enTs6PfSkmMmNW48